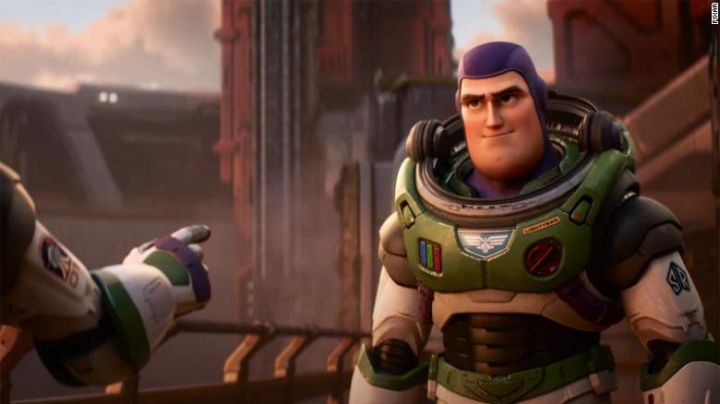 The most interesting aspect of “Lightyear” is dispensed with in the first 15 seconds, when it’s explained how and why you’re watching a movie devoted to the action-figure character from “Toy Story.” After that, the movie works primarily as a fairly likable action vehicle mixed with a familiar rumination on what defines a life, without rising into that top tier of Pixar fare its predecessors occupied.

Having hung up his shield, Chris Evans turns out to be the perfect choice to voice this version of Buzz Lightyear, a space ranger introduced on a perilous mission with his partner Alisha Hawthorne (Uzo Aduba) and a wide-eyed rookie who has red-shirted “Star Trek” crewman written all over him.
The mission goes awry, leaving Buzz and company stranded on this forbidding planet. Committed to make right what went wrong, Buzz embarks on his own quest to secure their escape, though the consequences of that are both unexpected and, in the execution of them, oddly sweet and touching.
Directed by Angus MacLane (“Finding Dory”), who shares script credit with Jason Headley, “Lightyear’s” secrets really shouldn’t be disgorged to maximize the viewing experience, but suffice it to say that the film name-checks plenty of things made popular by “Toy Story” lore, from “To infinity, and beyond!” to the villainous Zurg. There’s also a small group of upstart, unorthodox recruits, with Keke Palmer and Taika Waititi (the latter playing a character he seems to have done about seven times before) among the vocal contributors.
Although the action should entertain kids with its space-faring visuals, the bigger concepts in “Lightyear” — the ones that have elevated Pixar through the years — are thought-provoking, if perhaps not of the quality that has elevated the animation studio’s work to another level. They don’t rival something like “Up,” whose lessons come to mind, and the most consistently pleasing addition might be among the silliest: A robot cat named Sox who behaves like a household pet, yet also proves extremely useful in a pinch.
“Lightyear” also organically features an LGBTQ character, worth mentioning because of the discussion of a same-sex kiss in connection with the controversy around Disney’s response to Florida’s so-called “Don’t Say Gay” bill, and the studio’s subsequent skirmish with state officials. It’s a small element of the movie that shouldn’t be an issue, which, alas, probably won’t prevent bad-faith actors from seeking to make it one.
Given the source material and the hugely popular quartet of “Toy Story” movies (the most recent unwrapped in 2019) it was a no-brainer to premiere “Lightyear” theatrically, although quality-wise, it’s certainly no better than recent Pixar/Disney animated titles, “Soul” and more recently “Turning Red,” which bypassed theaters and went directly to Disney+.
Whether “Lightyear” lights up the box office, Disney+ will become its eventual home, and this genial Pixar production seems destined to enjoy a long shelf-life there, right next to all the other “Toys.” 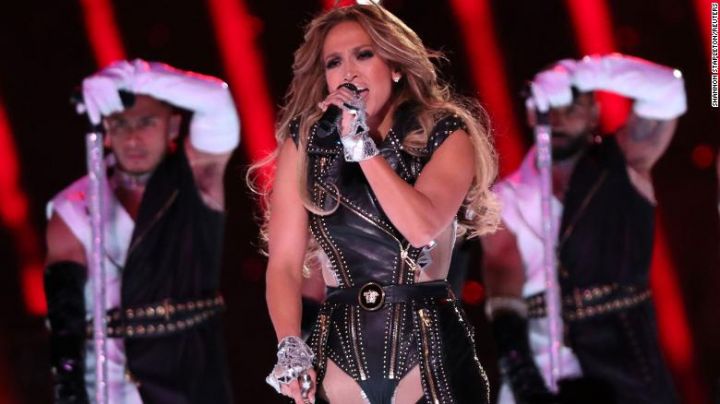 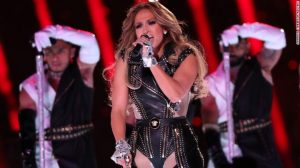 “Halftime” could have just as easily been titled “The Importance of Being J-Lo,” focusing on Jennifer Lopez’s life and career, somewhat arbitrarily, through a particularly busy, high-profile stretch in 2019 and early 2020. Although the documentary fritters around the edges of being interesting, it’s too much of a licensed product to deliver any grand insights.

The Netflix presentation certainly celebrates Lopez as a multi-dimensional star, one who overcame second guessing and the customary media barriers to shine as a singer, dancer and actor. In the period documented, she’s riding particularly high, receiving rave reviews for her work in the movie “Hustlers” while preparing to headline the Super Bowl halftime show, which is actually a rather strange anchor for this wide-ranging look at her.
“My whole life I’ve been battling and battling to be heard, to be seen, to be taken seriously,” Lopez explains, calling the Super Bowl showcase “an incredible opportunity to show the world who I am.”
Yet a major part of “Halftime” hinges on the fact that the whole world knows Lopez, or at least feels as if they do, through her multi-faceted career, her frequent coverage in the tabloids and a high profile that has made her fodder for latenight comedians — an appetite for her personal life, she laments, that at times has “overshadowed my career.”
If that last indignity, and the shallow focus on what she wears and who she dates, could arguably be perceived as something that goes with the territory for someone this famous, Lopez makes clear that she’s extremely sensitive to criticism, good or bad. At one point she even tears up seeing some of the praise heaped upon her for “Hustlers,” which she also produced.
Presented such a target-rich subject, director Amanda Micheli seemingly tries to cover too much ground, touching on interesting interludes without fully developing them. It would be nice to see more detail, for example, about Lopez’s clash with the NFL over the political commentary incorporated into the halftime show, or her conflicted feelings about awards campaigning (there’s an inordinate amount of emphasis on the Golden Globes), and less of a whole lot else.
Indeed, while Lopez contends that the creative process around her shows can be “messy,” this behind-the-scenes access is actually closer to boring. Given the buildup, the halftime show itself is also poorly presented in the editing, giving a taste of the spectacle that frankly feels like an awfully long time ago.
At one point, Lopez acknowledges that she has “lived my life in the public eye,” which exhibits a gift for understatement. “Halftime” offers her a forum to control that narrative, but in a way that makes it possible to admire her accomplishments without necessarily wanting to sit through the whole show.

Can a plant-based diet be nutritious, tasty and satisfying? Balance Box says it can. We give it a go. 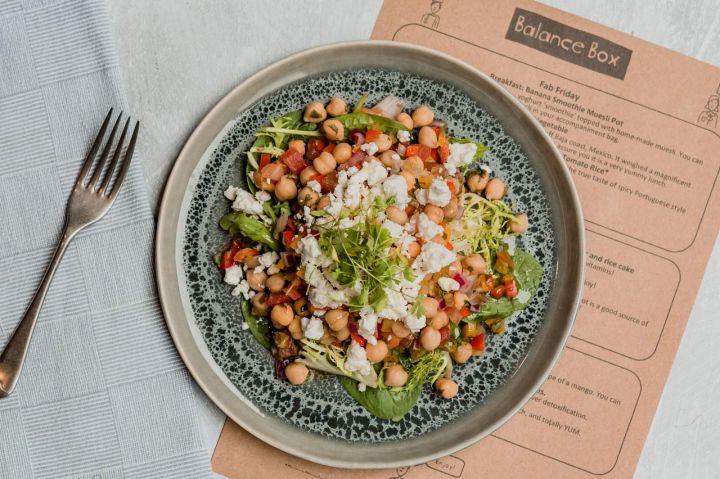 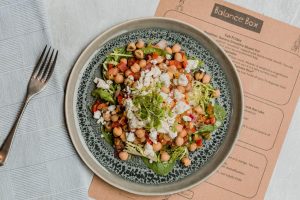 It was quite an incredible sight, those boxes full of colour promising four days’ worth of ready-to-eat nutritiously balanced food. And all plant-based. The company Balance Box says their meals are prepared by chefs without meat, dairy, or other animal products, and delivered nationwide to your doorstep.

A recent study conducted by Queen’s University Belfast stated that whilst many factors contribute to poor nutritional health, ‘poorly planned vegan diets are adding to malnutrition in healthy countries’. Partly due to this, the UK ranks seventh among the ten most iodine-deficient nations.

Many vegan foods are highly processed, which defeats the object if the object is a healthier diet.

Perhaps this is about to change. Not being a vegan or even a vegetarian, I found it hard to conceive of a diet of what I laughingly used to call ‘rabbit food”. And here before me were 12 meals promising satisfaction.

Breakfast was roasted apple bircher. It was pleasant enough but a little runny. Lunch of butternut squash, pepper and cashew nut salad was simply delicious. Dinner of Rose Harissa crust mushroom again was taste-bud friendly – I would have liked more.

Breakfast peanut butter, banana and gluten-free bread. Nice. Lunch Tempeh Thai salad flavoured with sesame seeds,  red chill and ginger – it tasted as good as it sounds, and dinner was Indian chickpea curry with a myriad of flavours and ingredients.

Breakfast mango & chia seed yoghurt with muesli. I don’t have a penchant for yoghurt, but the taste was good. Lunch was cumin roast cauliflower with harissa aubergine and hummus, and dinner, butterbean and pepper casserole.

Breakfast was blueberry bircher, lunch, mushroom & thyme soup served with oatcakes, and dinner was a very flavoursome vegetable biryani made with coconut milk and brown rice. 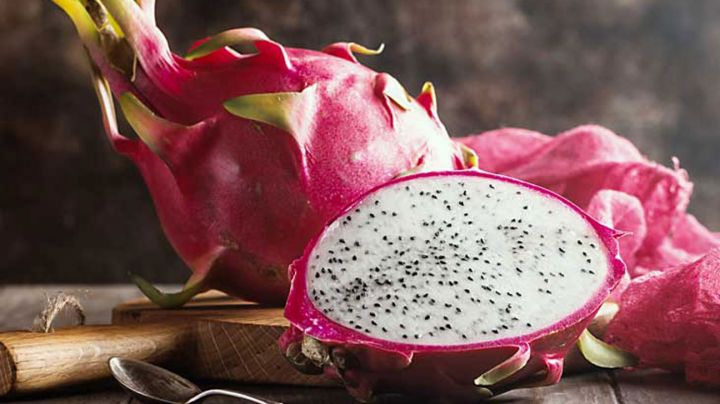 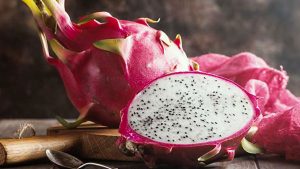 Whenever I travel, I try to live by the adage, “When in Rome … ” In Iceland I sampled pungent hákarl, or putrid shark, while in Cambodia I ate slithery snakehead fish. What lingers in my mind most is dragon fruit plucked fresh from the vine in Vietnam. Possessing hot pink skin; thick, green spines; black-specked white or rosy flesh; and a grenade-shaped body, the juicy dragon fruit remains one of the flashiest and most memorable foods around.

Thanks to a recent U.S. Department of Agriculture ruling, this flamboyant fruit no longer needs to be a mere memory for me. This spring, the U.S. began importing dragon fruit, or pitaya, from its native soil of Central America. Countries such as Belize, Honduras, Costa Rica and Panama can now stock U.S. markets with this exotic produce.

A member of the cactus family, dragon fruit thrives in tropical climates. Hence I could consume it in Vietnam and other parts of Southeast Asia. Likewise, the sultry weather in Latin America, the West Indies, California, Hawaii and Florida support its cultivation.

This nocturnal plant blooms under a full moon. In the wild, night creatures such as bats and moths pollinate its white-and-yellow flowers. On commercial farms, though, workers must go out after sundown and perform this task by hand.

For those who’ve never tried dragon fruit, this may seem like a lot of effort to grow such an odd-looking food. Trust me — it’s worth the work: This is a highly healthful and versatile treat.

Low in calories, dragon fruit serves up healthy doses of calcium; vitamins A, B, and C; and phosphorus. It’s also high in fiber, with 1 gram in 3 to 5 ounces of fresh fruit and roughly 10 grams in 3.5 ounces of dried fruit. A lot of nutritious eating gets packed into one small fruit.

Opinions differ on its flavor. To me, dragon fruit resembles a pleasant combination of kiwis, grapes, pears and a hint of vanilla. Others liken and refer to dragon fruit as a strawberry pear. I can see why. Similar to an unripe or winter pear, the mild flesh is a tad gritty but subtly sweet and juicy. Unlike a pear, its whitish or pinkish flesh is flecked with tiny, black, edible seeds reminiscent of a kiwi’s.

Light and refreshing, dragon fruit pairs well with a variety of foods. It goes nicely with ginger, lemon, lime, mango, mint, papaya, passion fruit, strawberries and seafood. It likewise has an affinity for balsamic vinegar and simple syrup.

You can eat dragon fruit raw, scooped directly from its skin, or cut up and added to salads. You can puree or juice it and add it to cocktails or make it into preserves. It does well in ice creams, sorbets, smoothies and even stir-frys. If you don’t want to tackle an entire fruit, you can enjoy it in commercially produced teas, fruit blends, liqueurs and energy drinks.

Dragon fruit can be found in Latin American and Asian markets as well as some gourmet shops. You can buy it fresh, canned or dried. In season from August to December, fresh dragon fruit should have blemish-free skin that yields when gently squeezed or pressed. Avoid those with bruised or withered skin.

Keep in mind that there are three varieties of dragon fruit, two of which have shocking magenta skin. If you see a yellow dragon fruit, don’t assume that it’s spoiled or unpalatable. It’s simply the white-fleshed variety of this fruit.

Placed in a plastic bag and refrigerated, fresh dragon fruit will keep for up to five days. To serve, cut the fruit in half and scoop out the flesh. You can also peel the fruit with a paring knife and then cut it into slices.