I’ve been lucky to have lived across the border, but luckier to have met some great people who love to eat as much as I do. I got to eat out a lot – from the local restaurants and hotels to traditional home-cooked meals. So when I am asked about that one dish which defines Pakistani cuisine, I’d say meat and lots of it. By meat, I mean beef, chicken and mutton, in that order.  Mutton is the most expensive meat, while the cheapest is chicken followed by beef and then fish.At most dinners, you will find keema (minced meat) preparation, a stewed meat dish such as Nihari, curried chicken like a Murgh Saalan, Pulao or a Biryani with either three meats or sometimes prawns or fish and plenty of Khameeri Rotis (yeasted breads).  In fact, the hearty mutton curry, Nihari is often served as a breakfast dish. As far as vegetables are concerned, you’ll mostly find them stuffed with some sort of keema or cooked in meat stock. Meat is quite a hit in most Pakistani homes. Dals and vegetables are also cooked with juicy chunks of meat to enhance the flavor. So you’ll often come across Meat-Wala Palak or Meat-Wale Chole. 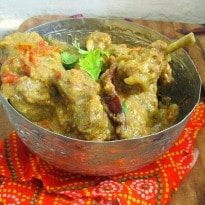 It’s interesting to note that most homes love stuffing vegetables with spicy minced meat, so I ate plenty of Karela Keema (bitter gourd with minced meat), Bharwan Baingan and Stuffed Parwal (pointed gourd).  The only vegetable that escaped the meaty stuffing  was the humble potato, which is perhaps a staple in most households.  On Sunday mornings, aloo-poori-chole-halwa was brunch everywhere you went.

The ever-so-versatile paneer was a novelty, with only a few stores offering you a version of this cheese. Strangely sometimes it was more expensive than eggs, which were yet another staple.  This is probably why Palak Paneer and Nargisi Kofta (boiled egg wrapped in a casing of minced meat) were made on mostly on special occasions. Another thing that I noticed was that there was no heeng (asafoetida) available in local markets, most locals haven’t even heard of this spice. I also found that the tandoori chicken served here wasn’t red like how it is back home. They use the same masalas, just no colour. And the Chicken Tikka is called Chicken Boti because of the way the pieces are cut.My favourite dish was a Chicken Shorba that I ate at my friend Amina’s house when I dropped in unannounced one evening around dinner. Served with steamed rice and sliced onions, this was perhaps the best and most memorable dish I’ve ever eaten in Pakistan. It is a simple and mildly-spiced chicken curry. Ingredients like onions, tomatoes, green chillies, garlic and ginger are sauteed and then mixed with spices like turmeric, chilli powder and cumin powder. It was finally cooked with yogurt and water. The result was a flavourful broth like curry that tastes spectacular both in summer and winter. The truth is, there is no set rule for most households in Pakistan, except maybe one – putting out a meat dish no matter what time of the day or night it is 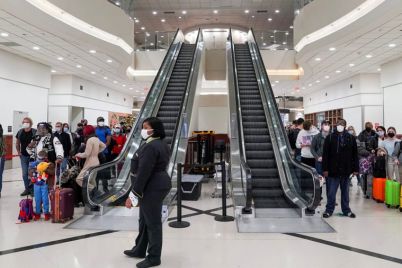 Tea As A Catalyst For Social Change

Based in New York with farms in Eastern Nepal, the company Nepal Tea Collective is working to create a more transparent and… Retro hedonism in a glass: why 2022 was the year of the martini

The simple cocktail is above all the drink of nostalgia – for a time before we felt judged, hopeless and…